Gosh its been a while, and summer has passed (mainly in a damp whimper round here ). Anyway Ed at Wordsmithing Pantagruel decided on MxMo LXVI. Now I've taken a pretty loose interpretation because I was focussing on the whole end of summer thing. To the extent I was down at the allotment on a frosty October morning & realised that the Fennel needed to be dealt with before the frost turned it to rotting mulch.
Now there were a few bulbs of fennel left, too many to use in one dish. So out came the Kilner jars & the vinegar. I added a strong dash of Chartreuse Elixir vegetale to the pickling mix and let the whole lot stand for a while.
Then came time to turn it into a cocktail.

So with it being Autumn I wanted a warming drink, not a long cool fruity drink and the sazerac seemed ideal, the fennel adding a last hurrah of Summer in the background.  Now there are arguments about whether a sazerac is made with rye or cognac. I tend to settle them using a 50-50 mix.

Muddle the fennel, pickle juice & Peychaud's in the bottom of a mixing glass, add a couple of cube of ice, the rye & the cognac & stir down. Double strain into a chilled glass, add an ice cube or two & a couple of fennel fronds as garnish. Sip in front of a roaring fire 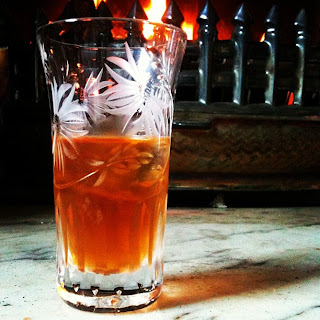